The Orchestra of the National Theatre Claudio Santoro have programmed the premiere of Wild Horses don’t Break for September 25, 2018.  Extremely excited to meet the conductor and players in 10 days!  You can see my name in lights here.  The work is based on a poem I received from a friend and poet, Annwen Bates.  I sincerely hope the work does her piece justice

OSM Camerata has won in the University/Conservatory category alongside the Oklahoma State University Symphony Orchestra.  One of the performing works was arranged by Keith Moss.  He would like to send his greetings to Marius Coetzee, Manager & Artistic Director OSM CAMERATA on a job well done! 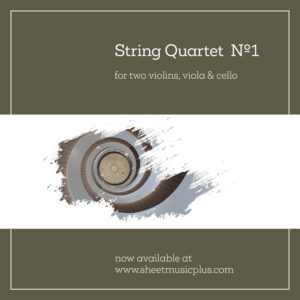 This quartet was completed in 2011 and was for the sheer enjoyment of writing music.  It has elements of Debussy and Shostakovich. In four movements the duration of the work is about 15 minutes.  It has all the elements of a good quartet, with some great fast passages as well as a slow fugal third movement.

Available for purchase at www.sheetmusicplus.com

The Camerata under the leadership of Marius Coetzee, Manager & Artistic Director OSM CAMERATA are revisiting the Keith Moss Concertino for Clarinet and Chamber Orchestra

Cape of Storms the OSM CAMERATA is an route.!!!

Listen to the Concertino on OSM RADIO Soloist Danre Strydom

The Concertino for clarinet & chamber orchestra by Keith Moss was commissioned by the SAMRO Foundation and OSM Camerata for the first International Clarinet Extravaganza to be presented at the OSM. Eddy van Oosthuyse, internationally acclaimed clarinettist was the soloist for the premiere. Movements 1 & 2.

The first performance took place on the 6th of October

drew 2500 people over three days, and the 2011 festival drew over 5000 people indicating that there is an audience for exploratory film in Gauteng. Audiences were culturally diverse and included delegates from numerous embassies and key figures from the film, television and animation industries.

Keith Moss is creating an original soundtrack for TRIPTYCH – a trilogy of locally produced, contemporary moving image works by Karien Mulder, Lodewyk Barkhuizen & Francois Jonker. The soundtrack will accompany an outdoor screening and will be performed live with the Pazz Consort featuring sopranro Melissa Gerber.

KEITH MOSS is a composer that has won the Stefans Grové National composition competition as well as the University of Pretoria post-graduate prize for best creative output. In 2010 he was the SAMRO overseas scholarship winner and studied in the UK at various institutions. He has recently started up an ensemble group called the PAZ CONSORT that has performed in Port Elizabeth, Grahamstown and parts of the Eastern Cape.
https://www.facebook.com/keithdaxmoss

MELISSA GERBER is an award winning S. Adrican soprano. In addition to her love for Baroque and French coloratura repertoire, Melissa also has a passion for new music. In 2009, together with the Chamber Music Company (UK) under the direction of Mark Troop, she performed newly composed South African works at the New Music Indaba hosted by UNISA. In 2011 Melissa premiered Panamanian composer Samuel Robles’ Coplas at the North West University’s Annual New Composers Concert, sponsored by the SAMRO Foundation. Currently Melissa is actively involved as soloist with the Paz Consort.
http://facebook.com/melis.gerber

The Paz Consort cellos will rejoin CH2 for another performance of SuitCase this November.  We pack our bags and head to Johannesburg’s premiere University under the care of the Sara Gon Agency

The Paz Consort will feature the music of Pieter Bezuidenhout,Franco Prinsloo, and Keith Moss on the 8th of August.  Newly written concerto’s for Marimba, Harp and String Orchestra will be conducted by Paz Consort director Keith Moss.  Magda de Vries brings her exceptional talent to the concert, a tireless champion of new music in South Africa.

The Paz Consort recently performed a concert of new works in Pendulum (read the review here).  Recordings of the concert were made for reference alone but have been posted to YouTube.  My piece Intimate Conversations separated into three movements:

I – The face of love

The Paz Consort has now taken up residence in Pretoria and has gone through a redesign.  The group continues to promise excellent performances of new works by South African composers, especially those who are young and emerging.  Keep an eye out for out Facebook page and subscribe to receive regular updates of upcoming concerts.

The Paz Consort has set a new date for the premiere of Keith’s new concerto for Euphonium and orchestra.  The concert will be conducted by Keith and alongside the podium his good friend and jazz pianist, John Edwards, will join forces with the orchestra in compositions of his own as well as some arrangements.

After a great start in Port Elizabeth in 2010, as well as a repeat performance in Cradock, the Paz Consort will launch 2011 with an all strings concert.  Joining the string ensemble will be guitarist and lecturer at Nelson Mandela Metropolitan University, Rudi Bower.  Performing the Vivaldi double concerto for guitar and strings guitarist Wayne Simpson will join Mr Bower on stage with conductor Keith Moss at the podium.

Sadly the National Arts Festival 2008 came to and end in July, and the commissioned work Quartet in fast and sparse received its performances.  I’m really thrilled I was able to contribute to Nicola Elliot‘s project and look forward to 2009